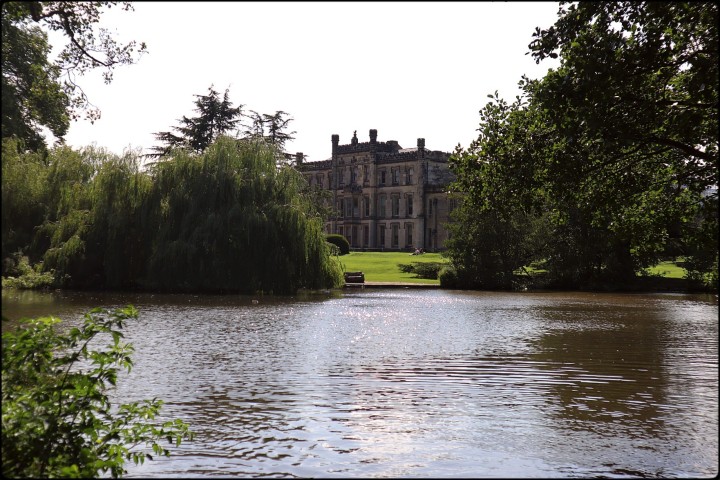 It’s amazing to be able to jump on a plane and land anywhere you want in the world, but I’m also a firm believer that you should never stop exploring your home city. As an East Midlands blogger, today I’m here to make the case for Derbyshire. On my travels around the world so far it has surprised me just how many people have heard of our tiny city (mainly because our football team consistently gets promoted to the Premier League only to be relegated back down again… every time), but I’d like to put it on the map for others closer to home who can really enjoy it. I even have some professional experience in recommending day trips because I worked in one of Derby’s city centre hotels, so you can trust that I will recommend the best I know.

On a sunny Sunday afternoon, Elvaston Castle is absolutely swarming with people – but in a good way! There’s 130 hectares of land to explore here, and a gorgeous Gothic stately home to eat your picnic in front of, all without anyone else bothering you. Bring your kids, your dogs, some food for the ducks, or even a bicycle for the popular cyclists route. For the photographers among you, it’s also a great place to bring a camera and hone your skills – it’s the first place Josh and I went when our Canon arrived!

Located in the heart of the country, Derbyshire is completely landlocked for miles around. But if you want to feel like you’re at the sea-side, Matlock Bath is the closest you’ll get. I didn’t get a mosquito bite in Turkey, Croatia or Italy, but I got one in Matlock Bath last year. It tends to have good weather in Summer, and there’s plenty to do here; from taking the ‘Lover’s Walk’ across the river or seeing the town from cable-car at the Heights of Abraham. If you’re less daring, walk by the souvenir shops and get yourself some proper British fish & chips! If that wasn’t enough, it’s also a popular biker’s retreat, and it has its own Illuminations parade from September through November.

This is one of the suggestions you’ll most definitely have heard of. People come from far and wide to visit Alton Towers, which is basically another stately home (Derbyshire isn’t short) with a theme park built around it. The ‘Hex’ ride is situated inside the house itself, or you can test yourself on ‘Wicker Man’ which is probably the most atmospheric, especially at night. If you plan to come here from further afield, you can get deals at hotels/park packages through Holiday Extras, and if you live nearby I’d definitely recommend coming for their Fireworks Spectacular in November!

Sadly, you can’t see much wildlife at Newstead Abbey, but they do have a friendly resident peacock! You might have heard of the poet Lord Byron, whose family owned Newstead Abbey thanks to the infamous King Henry VIII. Thanks to them you can roam the beautiful Botanical Gardens pictured above, or sit with a book and read by the lake. Alternatively, you can enter the house for a small fee and learn about the Byron’s colourful history.

I love not man the less, but Nature more.

The last time I went to Twycross Zoo, it was my first ‘proper’ date with Josh – and look what good has happened since! Depending when you go it can be a little bit expensive so look out for the half-term discounts, but on the bright side it’s only a 40-minute drive and a fairly easy one at that. You can hang out with the lemurs, giraffes, meerkats, orangutans and giant tortoises to name a few – some are allowed a great deal of roaming space but it really depends on your stance on zoos.

Did you have ‘Houses’ at primary school like the ones from Harry Potter? At mine we had Chatsworth, Haddon, Hardwick and Wingfield – all named after stately homes in the area – but Elvaston must have been bumped off the list! Although I’m a Wingfield at heart, I can’t deny that Chatsworth has so much natural beauty. It would be a brilliant drive to make in Summer, but my favourite time to go is Autumn as you get some beautiful landscape pictures with the fallen leaves; perhaps one reason that schools favour this as a place for art trips. Chatsworth House also hosts film screenings and seasonal events, and famous previous owners include Bess of Hardwick.

Sherwood Forest is a great day out, especially if you have kids, or are interested in local folklore. It is, of course, where the Robin Hood story originated, and the small village of Edwinstowe is where he is said to have married Maid Marian. Venture into the Forest to find walks and trails of varying difficulties and lengths, or come especially for one of the Forest’s events. I would heartily recommend the Robin Hood festival for parents as it was one of my highlights as a child. If you’ve seen the second picture above, you’ll also discover one of its oldest residents: the Great Oak, which has been standing for hundreds of years.

I won’t be adding postcode information for this one as there’s so many places you can visit in and around the Peak District – most of which we haven’t even been yet! Particular favourites include Castleton and Pomeroy, which would both be great to spend a couple of nights either camping or in a B&B. I’m not quite ready to go back to Buxton after failing my first driving test there, but somewhere else that’s firmly on my list is Eyam Plague Village. If you fancy a luxury spa day, get a package from The Retreat in Leek – it’s a lovely drive from Derby and you can stop along the way to discover beautiful villages and some great pub grub.

So, these were just a few of my recommendations in Derbyshire so far, and I’ll be sure to keep adding to this list as we find new favourites. If you find any recommendations useful or visit one as a result of this article, please do let me know in the comments! Happy exploring.

27 thoughts on “The best day trips to take from Derby, UK”

I am continuing to blog for entertainment purposes, not as travel endorsement. Please follow the travel restrictions and social distancing measures as set out by your country or region.

was amazing to meet Dexter today, such a well behaved boi 🦙💙
no filter needed 😍
had a lovely day exploring Porthmadog and supporting some local shops 🏴󠁧󠁢󠁷󠁬󠁳󠁿
well this was completely worth the 3.5 hour drive & 2hr wait for it to stop raining 😍🌧
feeling like a good day 🌞
wow, how beautiful by the river today! & thank god I now have a phone that doesn't take photos like a potato 😂