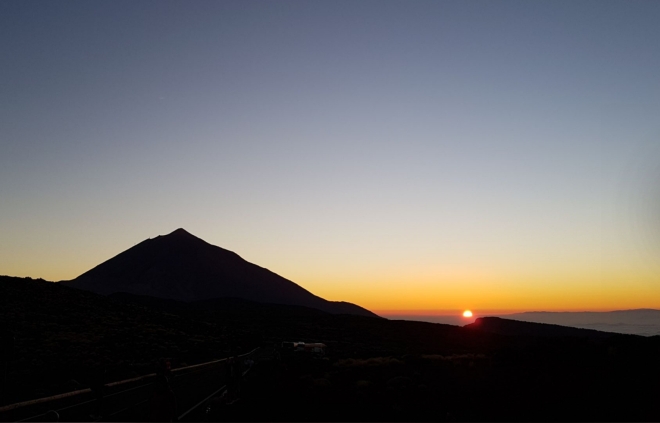 Last year Josh and I spent five amazing days in Tenerife. During that time we got to explore Puerto de Santiago, Los Cristianos and even our first black sand beach at Playa de la Arena. But if I had to choose one stand-out experience from them all, I can pretty confidently say that our Teide by Night adventure and star-gazing trip trumps everything else. (Except for maybe the Route 66 rock & cocktail bar – check that out on my Top Bars & Restaurants of 2019 😉).

We booked our Teide by Night trip about a month in advance at our local Tui store, as this was Josh’s trip of choice and we didn’t want it to get booked up! By now we have no record of how much we paid for it, but research tells me that the current going price is £71.96 each; which includes the same hearty three-course dinner at La Papillon (more on that later!). The same excursion direct from the Teide by Night company currently costs €85, so I’d recommend taking some time to figure out which currency is cheaper for you.

Getting to Teide National Park

If you’re one of the first on the coach, you’ll have to brace yourself for a long journey! Although Tenerife’s a tiny island, the driver has multiple pick-ups in mountainous regions so it can be rather slow, especially getting to the National Park itself. But don’t let that put you off as you really are in for an amazing experience. We had a fantastic tour guide from Belgium who knew everything there was to know about the Canary Islands – from the clouds on La Gomera to the tiny native beetles they use to make pink lipstick. Strange what sticks in your mind! Along the way you’ll stop off for a toilet break and snack at one of the country’s highest dessert shops.

As you begin to wind into the National Park, surely your tour guide will tell you all about Mount Teide’s last eruption in 1909. Evidence of the eruption is found mainly at the entrance point, as you begin to see the blackened ground and trees struggling to grow back. With 100 years between each blow, Teide is currently overdue an eruption, which is why in our later photos you will see that we aren’t allowed to get too close; only to admire it from afar. Halfway through the park you will stop to get your first photo opportunities – this is the part where I really fell in love with the Park and all it’s colours. No wonder it’s the backdrop of so many films, including Clash of the Titans.

It’s still a little while before you’ll watch the sun go down over Mount Teide – first they’ll take you for a three course dinner at one of the highest restaurants in Spain, La Papillon. We didn’t know what it was called at the time but we certainly did our research after the meal! It was unassuming but cosy and absolutely full of people, and the butternut squash soup I had was something I’ll never forget. England really has to work at its soup game.

For many this will be the first time you ever watch the sun go down from above the clouds; it certainly was for me and Josh! For this reason, they treat it like a very special occasion. They drive you down to a relatively quiet spot on a main road where they stop the coach to pour out the prosecco and provide blankets. Gradually, you’ll watch the colours as change and go golden, and eventually, pitch black.

You may not know that Teide National Park is considered the third best place in the world to stargaze, largely due to it’s height above sea level and the lack of light pollution. Finding that perfect space to stargaze amongst the other tour groups, though, can sometimes be a challenge. As mentioned earlier, our tour guide was awesome and very knowledgeable on the best techniques to use. But unfortunately there would be those comical moments where a car or a coach drove past with it’s headlights on, illuminating the whole area. In the moments without interruption, it was probably the most romantic experience I’ve ever had. Depending on what time of year you visit, you’ll obviously see different constellations – pointed out by your tour guide with a military-grade laser – and learn all the stories behind them, what gave them their names, and even some Greek myths. Obviously we didn’t ruin this experience by taking photos so I have borrowed one from the Teide by Night website below!

Josh’s mum and dad are off to Tenerife very soon, and so we’ve been pestering them to do this trip as much as we can, but I hope I’ve convinced some of you to take this once-in-a-lifetime journey 🌃

16 thoughts on “Teide by Night: star-gazing in Tenerife’s National Park”